Attorney Matthew DePerno filed his latest finding in the Circuit Court for Antrim County on Friday.

According to DePerno, there were 1,061 “phantom” ballots found in Antrim County during the 2020 election.

Attorney DePerno also contends there was nearly 100% turnout between ages 65 and 80 in the county despite the threat of the coronavirus.

DePerno says 1,061 ballots are not in the state database and do not exist on voter rolls, meaning they are likely phantom ballots.

From page 10 in the report: 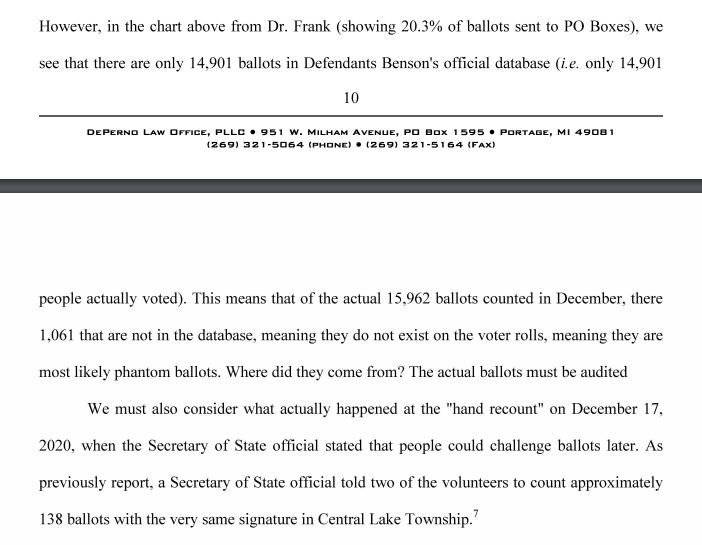 DePerno explains that in the December hand recount of Antrim county, there was a total of 15,952 ballots counted; however, Secretary of State Benson’s official database only had 14,901 ballots which means there exists 1,061 extra ballots not on the voter rolls, i.e., “phantom” ballots.
image.png

Phantom ballots could explain what happened at the hand recount in December when volunteers were told to count approximately 138 ballots with the very same signature. Despite their repeated objections and attempts to challenge the problem ballots, the Secretary of State official said, “That’s not your role at this very moment” and pushed the volunteers to count the ballots and finish the audit.

Based upon these findings, DePerno is not only demanding a complete audit, but due to false statements by officials who attributed the fraud to human error, DePerno is also amending William Bailey’s complaint to sue Sheryl Guy, Election Source, Jocelyn Benson and Jonathan Brater.

“Elected officials are charged with following the law, not hiding information and lying to their constituents in order to defraud and marginalize their right to vote.”

Seems as though we need to add several more elected officials to the list.